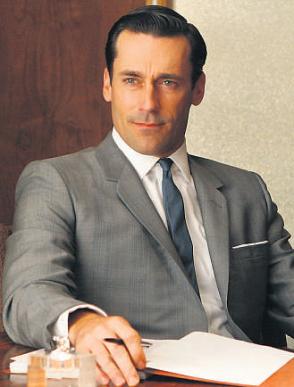 The Mad Men season 5 premiere drew 3.5 million viewers on Sunday, making it easily the most-watched episode in the history of this AMC 60s-era drama. Many of newcomers are falling for the cinematic stylings of this unconventional TV series created by Matthew Weiner. Four-time Emmy-award winner for Outstanding Drama Series, Mad Men is certainly making its mark on television history.

Around the office at HPB, we’ve been buzzing with anticipation about the new season for weeks – parched for more juicy episodes after the show’s 17-month hiatus.

Mad Men centers on the enigmatic character of Don Draper (played by Jon Hamm), advertising man, copywriter and creative director. Draper is a man about words, sometimes few. But when he speaks, its often profound or, on the other, completely irreverent.

Here are the 10 best quotes from Don Draper from the first four seasons of the show:

1. Nostalgia – it’s delicate, but potent. Teddy told me that in Greek, “nostalgia” literally means “the pain from an old wound.” It’s a twinge in your heart far more powerful than memory alone. This device isn’t a spaceship, it’s a time machine. It goes backwards, and forwards… it takes us to a place where we ache to go again. It’s not called the wheel, it’s called the carousel. It lets us travel the way a child travels – around and around, and back home again, to a place where we know we are loved.
Season 1, Episode 13: “The Wheel”

2. Advertising is based on one thing, happiness. And you know what happiness is? Happiness is the smell of a new car. It’s freedom from fear. It’s a billboard on the side of the road that screams reassurance that whatever you are doing is okay. You are okay.
Season 1, Episode 1: “Smoke Gets in Your Eyes”

3. There will be fat years and there will be lean years, but it is going to rain.
Season 3, Episode 1: “Out of Town”

5. I’m living like there’s no tomorrow, because there isn’t one.
Season 1, Episode 1: “Smoke Gets in Your Eyes”

6. You want some respect? Go out there and get it for yourself.
Season 4, Episode 8: “The Summer Man”

7. The day you sign a client is the day you start losing one.
Season 1, Episode 10: “Long Weekend”

9. I hate to break it to you but there is no big lie. There is no system. The universe is indifferent.
Season 1, Episode 8 “The Hobo Code”

10. We’re flawed because we want so much more. We’re ruined because we get these things and wish for what we had.
Season 4, Episode 8: “The Summer Man”

With historical story lines, social issues, vignettes of Manhattan, retro advertising and 60s fashion, what’s not to love?! If you’re catching up, grab a copy of all seasons of Mad Men available on DVD and Blu-Ray. Check the shelves at your local HPB or buy them on HPB.com.

What’s your favorite line from the characters of Mad Men? – Meredith

P.S. One of my personal favorites: “That’s life. One minute, you’re on top of the world. The next, some secretary is running over your foot with a lawn motor.”  — Joan Holloway-Harris (played by Christina Hendricks) from Season 3, Episode 6: “Guy Walks Into an Advertising Agency”

Meredith is Associate Creative Director at Half Price Books Corporate.
You can follow her on Twitter at @msquare21.