One of the most anticipated movies of the summer has to be The Dark Knight Rises, which will be the final installment in the Batman franchise for director Christopher Nolan. The Dark Knight Rises will pick up where The Dark Knight (2008) left off. Batman, played by Christian Bale, has been branded a criminal, and will rise to protect Gotham City from public enemy number one, Bane.

I can’t wait to see this film, as I expect nothing less than greatness. For even though these are “super hero” movies, they have been really well made with good, intriguing stories, rather than just being an extravaganza of explosions and special effects. Not only are the stories good, but the actors in the latest Batman franchise have delivered some pretty great performances. Heath Ledger’s portrayal of the Joker earned him an Oscar for Best Supporting Actor posthumously in 2009.

Which brings me around to another topic. Having grown up watching Adam West and Burt Ward in Batman (1966) after school with my brother, I realized there have been some pretty famous actors who have played the caped crusader. Can you name them all? 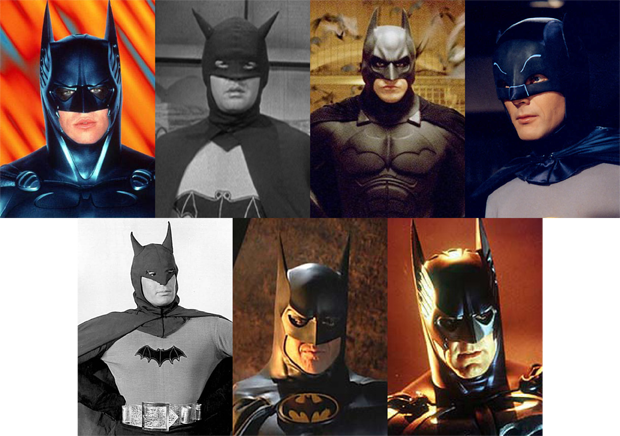 While you’re comparing Batman to Batman, check out this infographic by Ben Moore on the history of bat-suits from comic books, television and feature films.

With the temperatures consistently going into the triple digits for about half the nation and the theatrical release of Cowboys & Aliens, Harry Potter and Captain America now behind us, it’s obvious we are in the middle of the summer movie season. So, what makes a great summer movie besides getting out of the heat and the usual soda and bag of gummies? To me, summer movies have been about having a good time through loud explosions, funny moments and too many special effects to count. Here are my Top 5 Summer Blockbusters of the Past:

1. The Granddaddy of them all. The film that taught us “Don’t go in the water,” Jaws (1975). This really is the one that started opening-weekend blockbusters. Hollywood changed their thinking – instead of releasing limited prints of the film and going from city to city, they flooded the country with the film, creating lines around the block, box-office records and the first-ever “summer blockbuster.” On top of that, it is a truly remarkable film. Maybe I am showing my age here, but I remember when and where I first saw Jaws at the theater. Unfortunately, I also remember the nightmares of white teeth and refusing to swim at the Motel 6 swimming pool while on a family vacation. Robert Shaw gives a terrific performance and should have received an Oscar nomination for his “Indianapolis” speech alone. Roy Scheider, Richard Dreyfuss, Lorraine Gary and Murray Hamilton – all spot on with their performances. Can’t recommend this film enough – it is as near perfect a movie as they come.

2. The runner up, from a long time ago, in a galaxy far far away… Star Wars (1977). What person my age didn’t see Star Wars a dozen times every time it came to town? Watching it again brings back memories of camping out all day with my brother just to be the first to get tickets. Maybe the older generation had the same rush of excitement seeing The Wizard of Oz (1939) for the first time (who knows?), but to kids in grade school at the time, Star Wars was pure magic. From the thundering opening credits to the final credits, as the type disappears in space, Star Wars took us all over the galaxy in this classic good versus evil movie. With the current day use of Droid phones, it is hard to deny that Star Wars is a piece of Americana.

3. Raiders of the Lost Ark (1981). I guess we should just refer to Mr Spielberg as Mr. Summer Blockbuster. There may not be any more recognizable character than Indiana Jones: Harrison Ford, sporting his fedora and leather jacket cracking his iconic whip. This film is pure entertainment – a great nonstop action movie with a fantastic story modeled after the cliffhanger serials.

4. An adventure 65 million years in the making: Jurassic Park (1993). I consider Jurassic Park one of the milestone movies for special effects. Just as Star Wars set the bar in the late 70s and Avatar a few years ago, Jurassic Park did the same for its time. Some really great work from Industrial Light and Magic integrating CG and live action. Great summer fun.

5. The Dark Knight (2008). After the success of Batman Begins (2005), director Christopher Nolan gets very dark and sinister with this sequel. This film was going to be a box office smash anyway, but the untimely death of Heath Ledger had the masses buying tickets in droves. What makes this one great is that between the car chases and crazy stunts, there is a well crafted story with all involved giving very good performances – and in Heath Ledger’s case, a truly great performance, earning him the Best Supporting Actor Oscar.

An honorable mention: Independence Day (1996) which had everything you would want for the summer – cities being reduced to a pile of rubble and plenty of entertaining visuals. Unfortunately, it also had every cliché character all packed in one film.

But hey, these are only my opinions. What are some of your favorite summer blockbusters of the past? Whatever you watch this summer, just remember, no talking or texting during the feature presentation.