October 16-22 is Teen Read Week, which is a literacy initiative of the Young Adult Library Services Association (YALSA)  and the American Library Association (ALA). To help celebrate this week, I want to encourage teens to “Read the Movie.”  Below are my recommendations of great books that have been turned into entertaining movies (which you’ve probably already seen).

How to Train Your Dragon by Cressida Cowell
Made into the wonderful Dreamworks movie, this book is a wonder in itself, and besides the names, and Hiccup’s facetious attitude about the place he lives, the stories are completely different.  In this book, everyone has a dragon, and Hiccup’s first task, in order to make him a man in the eyes of his village, is to catch a dragon. His second task is to train it.  However, dragons are not so easy to train, and the only training manual that his village has consists of only one page that says “Yell at them, the louder, the better.”  Not being much of a yeller, Hiccup has to figure out a different way to train his dragon, pass his manhood test and save the day. 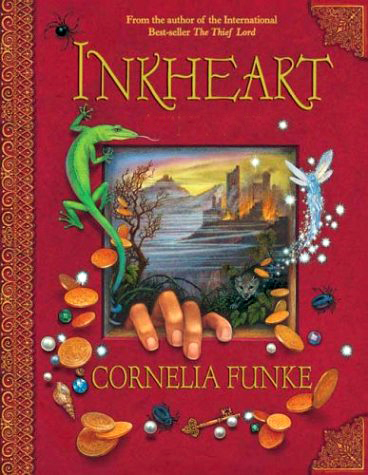 Inkheart by Cornelia Funke
Though I never miss a Brendan Fraser movie, I’m glad I did not miss this book either, for the movie did use a lot of creative license in the screenplay. The book is told through the eyes of Meggie, whose father, a bookbinder, goes on the run from an evil man named Capricorn for reasons he will not explain. When her father gets kidnapped, Meggie must learn to trust an aunt she doesn’t like and a strange man named Dustfinger who betrayed her father, in order to save her father and save the book that Capricorn wants so desperately to get his hands on. She soon learns that her father has the ability to literally bring the story to life whenever he reads out loud. This adventure story is as much about the love of books as it is the actual adventure, with quotes from different books to begin each chapter and quaint illustrations to end it.

Eragon by Christopher Paolini
While the movie is good, the book holds so much more and is an epic tale reminiscent of J.R.R. Tolkien. While Eragon is out hunting one day, a great explosion scares away his prey, but leaves a smooth blue and white stone, which he tries to sell a couple of times with no luck. Finally one night, the stone hatches, and out pops a dragon.  Suddenly, Eragon finds himself being chased across the empire with a magic-wielding, sword-fighting storyteller, who knows more about what’s going on than he is willing to tell. This book caused me to cry at least twice and the dialogue (especially where Brom was concerned) had me laughing numerous times.

Twilight by Stephenie Meyer
I know. I know. Who hasn’t read Twilight? Well, it’s time to pull it out and read it again. It’s October. Halloween is getting close. What a perfect time to read a love story about a “vegetarian” vampire (or so the other vampires call the Cullens) who can read minds, and the new girl in town who doesn’t know how good she smells. Though at times Meyers sentence structure can have you reading a sentence more than once to make sure you understand what she’s saying, the story sucks you in until you wonder things like, “How normal is my mind?” and “That guy over there is pretty pale.  I wonder if he’s a vampire.”  This was a book I could not put down. And though I haven’t watched any of the Twilight movies yet (Vampire movies have always freaked me out a bit), I may have to rent them this Halloween, provided I don’t have to watch them alone.

My point is don’t be content to just watch the movie. You never know what you might be missing. Read the book. Don’t forget to check out the winners of the YALSA Top Ten: Inkheark, Eragon and Twilight have all been on this list at one time. So, what is your favorite book that has been made into a movie?