We are thrilled to introduce our August/September 2019 HPB Book Club Selection, Things You Save in a Fire by Katherine Center. This book addresses the struggles of Cassie Hanwell, a woman born for emergencies who uproots her life to move from Texas to Boston, where she struggles to find her place as one of the only female firefighters in the state. This heartfelt, stirring novel touches on two of the most important things in life— love and the meaning of courage. In this installment of our Behind the Book blog series, Katherine Center gives us insight into her inspiration and decision to tell Cassie’s story.

I didn’t really want to write a novel about a female firefighter at first.

Let’s just say I know too much.

My husband is a volunteer firefighter and has been for the 25 years we’ve been together, so I know exactly how hot, and exhausting, and grimy that job is. I’ve seen him come back from jobs soaked in smoke, crusty with sweat, aching everywhere.

It’s not a job that I glamorize in my head.

It’s also not a job that I, myself, would ever want to do.

We’re opposites in that way. I’m a curl-up-on-the-couch-with-a-fuzzy-blanket-and-a-book kinda girl, and he’s an outdoor guy. He gets antsy if he stays in the house for too long.

When the tones go off for a fire, he’s delighted. He jumps up from the dinner table, grabs his bunker gear, charges out the door, and leaves a plate of uneaten food.

That’s what I’m saying. He gives up dinner for firefighting.

And he loves dinner.

After I’d finished writing How to Walk Away, when my editor and I were talking about what my next book might be, she brought up the female firefighter who pulled Margaret out of the plane wreckage in that story and said, “I’m curious about her.”

And my first thought was, No way.

When I write a novel, it’s like a year-long practice in extreme empathy for an imaginary person. I write in the first person, kind of channeling these characters’ lives and experiences: women telling their own stories in their own words. The number one thing I have to be able to do with the narrators of my stories is imagine what it’s like to be them.

But how could I imagine being a person who actively wanted to put on 75 pounds of gear, pick up a hose that weighs more than she did, and literally walk into a burning building?

I knew in theory that she’d be an interesting character.

I knew, too, that I’d be a great person to write a character like her—given all the years I’ve spent with my husband, hearing all his hilarious and heartbreaking stories.

But I just couldn’t see why anybody would want to do that job.

I explained all this to my husband, knowing full well I was talking to a person who loves to do that job.

Then he asked me a question that changed everything. He said, “What if she’s just really, really good at it?”

And that was it.

That was my way in.

Suddenly, I knew her.

I knew her because that’s my husband. That’s why he loves that job. He’s good at it. He’s good at the camaraderie with the guys. He’s good at the bravery, and the selflessness, and the helping. He’s good at talking to patients and keeping them calm—even joking around with them in moments of total panic. He’s particularly good at keeping his wits about him when everybody else is freaking the heck out.

Thinking about it that way, thinking about how good it feels to be good at something, brought everything into focus.

I gave Cassie all those qualities my husband has.

But then, as I was writing, I realized she’s not only like him.

That’s writing, for me.

By the time I figured it out, I had no choice but to keep facing down every barrier and disappointment and humiliation in the hopes that someday I’d get there. I just loved the job so much, I couldn’t seem to make myself quit.

And I know something else, too: I know we’re better for the trying. No matter what happens, no matter how anything ever turns out, I know the trying itself makes us stronger, wiser, and more compassionate.

I’d probably be very intimidated by Cassie the firefighter if I ever met her in real life. All her strength and bravado and toughness would scare me, I think. I suspect I’d get very shy and quiet.

But that’s the great thing about stories. They let us get to know people from the inside out. They bring us past those barriers that keep us apart. They let us connect—deep down past the surface, where it matters—in a way that makes us something deeper than friends.

That connection changes us. It makes us better.

I’m better for knowing Cassie. And I hope you will be, too. 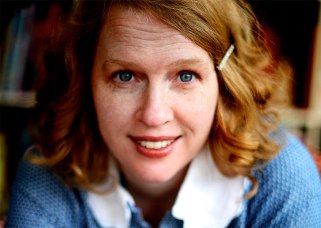 Katherine Center is the New York Times and USA Today Bestselling Author of How to Walk Away, as well as the upcoming novel, Things You Save in a Fire (August 13, 2019). She’s also written five other bittersweet comic novels about love and family, including The Bright Side of Disaster, The Lost Husband and Happiness for Beginners. The Lost Husband is currently in production as a feature film starring Josh Duhamel and Leslie Bibb. Katherine’s work has appeared in Redbook, InStyle, People, USA Today, Vanity Fair, The Atlantic, Real Simple, Southern Living, InTouch, the Dallas Morning News, and the Houston Chronicle, and many others. You can find Katherine on Twitter, Facebook and Instagram.

One thought on “Behind the Book: Things You Save in a Fire by Katherine Center”