We love story time picture books. And crafts. And the only thing we love more than storytime or crafts is a storytime craft. We’re also total suckers for anything involving animals. So in honor of Children’s Book Week, my daughters Jane and Rose (four and three years old respectively) and I decided to tackle some crafts inspired by a few of our favorite animal picture books.

1. Fork Mane Lion
We are currently loving Library Lion by Michelle Knudsen and Kevin Hawkes, a delightful story about a full grown lion who takes up residence inside a library and becomes the head librarian’s biggest helper and ultimate savior. Jane and Rose love to paint, so we busted out some small canvases, washable tempura paint, and a few forks.

I drew the little lion faces and showed the girls how to dip their forks in the paint and press them outward toward the edge of the canvas (as pictured above on the smaller magnet). They each took their own approach (Jane’s pictured left, Rose’s right) and had a lot of fun creating their own manes.

2. Handprint PomPom Giraffes
We recently discovered Giraffe Problems, the follow up to Penguin Problems, by Jory John and Lane Smith, about a giraffe who feels insecure about his neck until a friend shows him how to appreciate his best asset. Nothing excites my girls more than unlimited access to glue and pom poms, so I drew their little hands and forearms onto a piece of cream cardstock and they went to town. 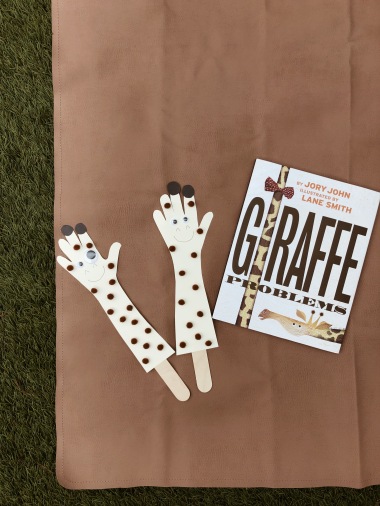 We added some googly eyes (always a hit) and taped a popsicle stick to the back and viola – instant entertainment.

3. Unicorn Flower Pot
We read Not Quite Narwhal by Jessie Sima pretty much everyday. If you’re not familiar, Kelp lives under the sea with the narwhals – until the day he’s swept to shore and realizes he’s actually a unicorn. It’s absolutely delightful and I knew that Jane and Rose would have a blast turning some ordinary terra cotta pots into Magical Unicorn Planters – especially since it involved lots and lots and lots of glitter. 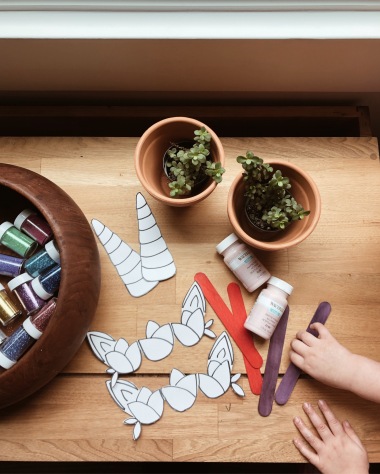 This project took a bit of effort on my part, but each step was really fun to make in and of itself. I searched for clip art for the unicorn horn (bless you, Internet), which I printed onto white cardstock and then free-handed the flower crown and ears to match. I cut them out and handed them to my children along with a few glue sticks and a set of glitter shakers and instantly became The Coolest Mom Ever in their eyes (a title I had to really prize when it came time to clean up J)

Meanwhile, I painted a few standard terra cotta pots with pink chalk paint and added some unicorn eyes. Once everything had dried, we taped popsicle sticks to the backs of the horn and crown and added them to a few of our favorite succulents. The girls are obsessed and asked if they could keep them in their rooms (I figured I could use a few more Cool Mom points so I said yes).

4. Snake Sock Puppet
Can you believe that in my 4.5 years of motherhood, I’ve never made a sock puppet? True story. Crictor by Toni Ungerer has been a huge favorite ever since we found a copy in the children’s nostalgia section at our local Half Price Books; it’s a 1958 gem about Madame Bodot, a French gentlewoman, and her pet snake Crictor, who wears sweaters and travels about town on a leash and teaches school children the alphabet by contorting his body into the ABCs. I recently found a forgotten pair of green fuzzy socks in my drawer and knew I had to bust out my hot glue gun to make some Crictor sock puppets.

I used red felt for the tongue, white pom poms for the eyes and black construction paper for the pupils. This was definitely the easiest craft we made together, and also the most interactive. 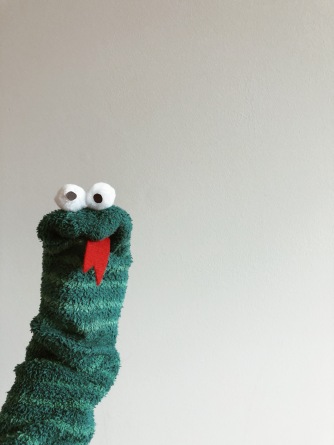 5. Felt Dragon Mask
Franklin’s Flying Bookshop is a picture book lovers’ dream; it’s about a dragon named Franklin who loves books but can’t connect with his village’s humans because he’s, you know, a dragon; but then he meets Luna, a little girl who also loves books, and isn’t scared of Franklin; and together they create a bookstore between Franklin’s wings and invite the village folks aboard (they all become friends, insert crying emojis). This is the craft that took the most time but also had the biggest reward – the girls loved picking our felt colors, gluing them all together, and trying on the mask at the end. 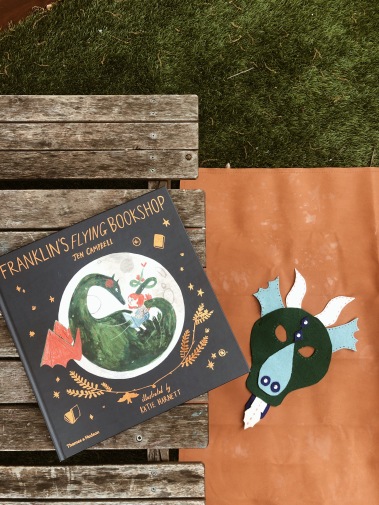 This one took awhile because I had to create my own pattern for the mask. I took a stack of 8×10 pieces of paper, folded them each in half, and drew out the part of the mask I was working on (face, nose, nostrils, mouth, tongue, horns, wings). Then I cut them out (folding the paper makes everything nice and symmetrical) and applied the pattern to our 8 x 10 pieces of felt (I have to admit this is my first mask so we used the cheapest felt from the craft store; next time I would definitely spring for the nicer, stiffer kind which would make the mask hold up better). Jane and Rose helped me choose the colors and then we worked together to assemble all the pieces together (we had a bit of a glue fail here – I tried to let them use glue sticks but they didn’t hold, so I wound up using my hot glue gun again. Next time I’ll be sure to have a glue pot on hand so they can help AND we’ll be sure the mask stays together).

Once the mask was assembled, we added some contrasting color detail with fabric markers, punched holes in each side, and added elastic (note: use the smallest hole punch possible and a big knot or the elastic will pull right through the holes when they try putting on the mask. Ask me how I learned this J)

We’d love to hear from you – what are some of your favorite story time crafts? Comment below!

Kristen is a guest contributor who worked in marketing at HPB Corporate from 2011-2014. She now hangs out full time with her daughters in Houston and documents their days on Instagram.

One thought on “5 Craftastic Ideas for Storytime”