Editor’s Note: For Elizabeth, stories provide both an escape from trouble times and an answer to problems. Her latest novel, Night of Miracles, reflects her desire to remind people of the good things in life. Read on to discover Elizabeth’s take on what has inspired her novels.

When I was nine years old, I wrote and submitted my first poem to American Girl magazine. It was called “Dawn,” and it was a stinker of a poem, even by the most lenient of standards, but it did two things. One was that it got me on the path of buying my father a Cadillac—for I thought surely the poem would be published and I would receive somewhere around a million dollars. Unfortunately, my poem was rejected, and should have been, and I did not get a million dollars, or even the pittance that the real payment must have been. But I got something else. Writing that poem showed me the pleasure of getting what I was feeling inside, out.

That need to bring something that I’m feeling into the light is why I write. It’s usually the vaguest of feelings when I start: something hurts, something is exhilarating or inspiring, something is a mystery that I want to understand. All of those feelings came into play when I wrote The Story of Arthur Truluv. When I began, all I had was the image of an old man who was eating lunch in a cemetery beside his wife’s grave, as he did daily. Then there appeared in my imagination a kind of goth teenaged girl who was also in the cemetery. I knew she was a very troubled person and I knew that the two of them would become friends. The novel is about their friendship but it is about a great deal more, namely, the worth of kindness, the wonders of ordinary life and the way that love always finds a way.

We are living in very troubled times, and writing The Story of Arthur Truluv served to take me away from the headlines to the fictional town of Mason, Missouri. Here was a place more innocent, calm and safe-feeling. When I finished the novel, I realized I wasn’t finished being in Mason because the whole time I wrote it, I felt better about the world, more hopeful about the future. Also, I loved the character of Lucille Howard, an irascible but loving individual who has the habit of being a wee bit blunt. (Want to know something? I based the character of Lucille in large part on my best friend, who is also quite plain- spoken. When I told her that, as I thought I should, my friend said, “Yeah. I thought so.”) 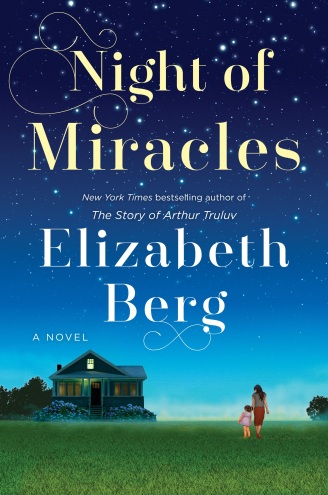 In Night of Miracles, I got to be in Mason again, I got to be in Lucille Howard’s head again, and I got to create new characters. If there’s one thing I love, it’s a good diner, and for this novel I got to create (and therefore “be” in) Polly’s Henhouse. I created a waitress who works there and is in love with a cab driver who frequents the place and loves her right back, yet neither of them of can quite communicate their ardor.

I also got to bring in a newcomer from Boston whose heart aches and a family with a mother who is dealing with a catastrophic diagnosis. An escape from troubled times, you might be thinking? Well, yes. Life is never without its troubles, but when the approach to any problem comes from a place of genuine good will and involves people doing right by each other, the problems look and behave differently, and they are actually resolved.

With both Mason novels, I wanted to remind people of their inherent goodness and worth. I wanted to call out resilience, optimism, a wide kind of non-secular faith and a primal trust with which we are all born and can too easily forget. Most succinctly, I wanted to offer solace and relief. If the feedback I’ve received thus far is any indication, it worked.

And by the way… I did end up buying my Dad a Cadillac. I was forty-nine, not nine when it happened, but it still counted. Good things always do.

Elizabeth Berg is the New York Times bestselling author of many novels, including We Are All Welcome Here, The Year of Pleasures, The Art of Mending, Say When, True to Form, Never Change, and Open House, which was an Oprah’s Book Club selection in 2000. Durable Goods and Joy School were selected as ALA Best Books of the Year, and Talk Before Sleep was short-listed for the ABBY Award in 1996. The winner of the 1997 New England Booksellers Award for her body of work, Elizabeth Berg is also the author of a nonfiction work, Escaping into the Open: The Art of Writing True. She lives in Chicago. You can find Elizabeth’s latest novel, Night of Miracles, on sale November 13 at your local Half Price Books and HPB.com.