EDITOR’S NOTE: This year in our HPB calendar, we’re celebrating all things printed and recorded—and played, solved, watched, etc. In other words, all the cool stuff we buy and sell in our stores. For September, we’re getting our hands dirty with a look at the history of comic books, graphic novels and manga. 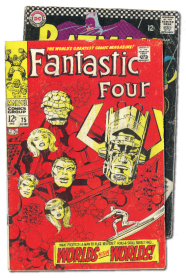 TIMELINE
1933  Famous Funnies: A Carnival of Comics, the first modern American comic book, is published.
1938  The superhero archetype is born with the debut of Superman in Action Comics #1.
1964  The first underground comic, Frank Stack’s The Adventures of Jesus, debuts.
1992  Art Spiegelman’s Maus becomes the first graphic novel to win a Pulitzer Prize.

Want to dive deeper? Check out these great products!

The Amazing Adventures of Kavalier and Clay by Michael Chabo

The Origins of Comics: From William Hogarth to Winsor McCay by Thierry Smolderen

A History of Underground Comics by Mark James Estren

Graphic Novels: Everything You Need to Know by Paul Gravett

Comics and Sequential Art by Will Eisner