June is Great Outdoors Month, which made us think of HPB Regional Manager, Tony Warmus. When he’s not overseeing stores in Indiana, Kentucky, Georgia and Missouri, Tony is outside hiking, skiing the Canadian Rockies or tending to his bee apiary. In this edition of Meet the Bibilomaniac, Tony shares his favorite books, movies, outdoor adventures and more. Take it away, Tony! 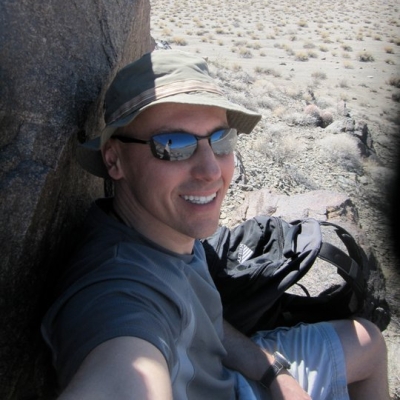 What is your favorite part about working here?
The people I work with, some of whom I’ve known for over 20 years. That and the fact that I can always discover something new to read when I visit each of my stores.

What are you reading right now?
Well, I’m reading more than one book. It’s hard to have only one going at a time! For fiction, I’m currently reading a collection of short stories by Ottessa Moshfegh called Homesick for Another World. She was recommended by David Sedaris when we saw him give a reading at Butler University here in Indianapolis. To say her humor is obtuse is putting it mildly! I love the voice of her characters and the odd details she describes. I haven’t laughed out loud while reading a book in a quite a while. I’d highly recommend her book.

For nonfiction, I just picked up The Earth Moved: On the Remarkable Achievements of Earthworms by Amy Stewart. It’s basically about what the title says, and it’s full of so many interesting facts about earthworms that I can’t put it down. For example, did you know that after the glaciers retreated after the last ice age, the exposed ground would have remained free of earthworms for nearly 1.5 million years if it hadn’t been for the spread of agrarian culture around the world? I just think that’s incredible! It’s a very readable book. Amy Stewart also wrote The Drunken Botanist, another one of my favorites.

If you could write a book about yourself, what would the title be?
It would be one of those long titles, probably something like Pour Me Some Wine and I’ll Tell You My Tale. As that title may suggest, I’m fond of a good glass of wine, particularly during what I like to call my “attitude adjustment” hour between 5-6 p.m. every day.

What is your all-time favorite book, movie or album?
My all-time favorite book is The Direction of Time by physicist Hans Reichenbach. I guess that gives me away as being a bit of a nerd. That book is the classic work on the underlying nature of time, part philosophy and part advanced physics. Hans Reichenbach was the first scientist to help really clarify the notion that entropy ensures time moves in one direction, what we perceive as forward.

My all-time favorite movie would be Aliens, at least judging by the number of times I’ve re-watched it. That movie is good on so many levels, but I really love watching the transition of Ripley from meek, science consultant to confident leader of the surviving group of soldiers.

My all-time favorite album would be The Smith’s Hatful of Hollow, because their music was popular during my college years at the University of Illinois. More recently, I’d say Tycho’s Dive.

What movie or TV shows are you embarrassed to admit you love?
Master & Commander: Far Side of the World. It’s based on a book of the same name by Patrick O’Brian, who also wrote The Golden Ocean, and who’s another favorite author of mine. I’ve seen the movie so many times that my partner just rolls his eyes when he walks by and sees it on the television again. Also, The Cable Guy with Jim Carrey. I know I’m not alone in that!

What is something people would be surprised to learn about you?
I’m a beekeeper!

What are some of your favorite outdoor activities? Also, tell us more about your interest in beekeeping.
I’m an avid skier and you can find me out on the slopes quite a bit in January and February each year. Sunshine Village in Banff, Alberta Canada is my favorite ski resort.

I’ve been a beekeeper for seven seasons now, and I’m still learning the ropes. This year I’ve grown my apiary to 15 hives, and I’ll be making my first ever attempt to breed my own queens. For anyone interested, my favorite book about beekeeping is First Lessons in Beekeeping by Dadant. Bees are fascinating creatures, the only insect domesticated by humans. I love working with bees, and I can sit for an hour just watching the workers come and go from a hive entrance.

Where’s the best place you’ve travelled to?
The Canadian Rockies. I’ve skied as well as hiked up there many times. This past season I visited Alberta, Canada and stayed at the Fairmont Banff Springs Hotel, which is a massive, fully-restored old luxury hotel that was built during the 19th century as one of Canada’s grand railway hotels. The views are incredible, and it feels like you’re visiting the past when you stay there.

What’s the most interesting experience you’ve had on an outdoor adventure?
I broke my arm once on a solo hike in the Gila Wilderness in Southern New Mexico near Silver City. The Gila is a very remote area, considered a ‘high plateau desert’ with a fire ecology. Winter storms often knock down dead, burnt trees, some of them as much five feet in diameter, and those trees can block or obscure the trail.  I was hiking through just such an area in early spring, and it was while I was climbing over the fallen trees that I slipped and broke my left arm just above the wrist. Luckily I was only five hours from the end of my hike, but that was an interesting experience!

Anything else you’d like to add?
I think everybody, every year should be required to go on a “reading vacation,” a place where they bring all of their unread books and just spend uninterrupted hours immersed in something new, fiction or nonfiction. Doesn’t that sound like heaven?