For the December presentation in our monthly Collectible Conversations series at the HPB Flagship in Dallas, we welcome Dallas historian Bob Reitz. Reitz will discuss his growing up in Dallas in the 50s and 60s using books as his reference points. Bob gave an earlier Collectible Conversations talk specifically about his life in bookstores and his 37 books about bookstores from his collection. 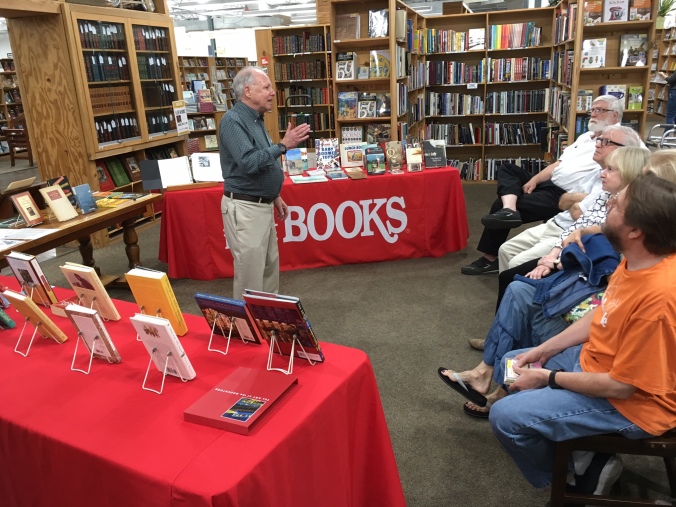 We asked Bob to give us a little preview of his upcoming talk.

When did you first feel that Dallas in the 50s and 60s was a special place and time?
In January of 1954, my father’s insurance company transferred him to Dallas from upstate New York. We had a new house built in the Casa View section of northeast Dallas. Cotton fields were being plowed under to create homes for newly returned servicemen beginning to start families after World War II. I started first grade and finished high school living in the same house. I still have a small group of friends from these times. Growing up, it seemed normal to have new movie houses, drive-ins, libraries, swimming pools and a thriving downtown. I never realized as a kid what we had in these unique and special times.

I’ve always thought that besides your family, your neighborhood makes the biggest difference in your life. I didn’t grow up smelling salt water from the ocean or seeing snow-covered mountains on the horizon. I grew up on the rolling blackland prairies in a large urban city straddling the Trinity River.

I know you own many books on the subject. Is there one that may best encapsulate the era for, say, a 20-year-old reader from Milwaukee?
Probably the most thoughtful book about this era in Dallas is by Pulitzer Prize-winning author Lawrence Wright (who graduated from Dallas’s Woodrow Wilson High School). The cover of his book In the New World:  Growing Up with America from the Sixties to the Eighties (1989) reads: “It’s both a story of one man’s coming of age in 1960s Dallas and a provocative account of the end of American innocence, the assassination of John F. Kennedy, the Vietnam War, and the Civil Rights era.”

Were there any particular events of the 50s or 60s that made the biggest impression on you?
One significant event took place in August of 1960 to celebrate the 50th anniversary of the Boy Scouts of America. Five thousand Scouts camped on a hill overlooking White Rock Lake. I had never seen so many Scouts in one place at one time—lines of tents covered the sloping hill in the middle of the city. Today, there is a sign on the slope designating the location as Scout Hill.

The rest of the world probably thinks of President Kennedy’s assassination as the most important event that occurred in Dallas in the 60s. Are many of your books primarily or partially about that event?
I was a junior in high school on that fateful November 22, 1963. I was finishing lunch when a student ran in and said, “The president has been shot, the president has been shot!” They moved us into the auditorium and by 2 p.m. they dismissed classes for the day.

We stayed glued to the television for the next week, witnessing the supposed ineptness of the Dallas Police play out on national TV, including the on-air killing of Lee Harvey Oswald by night club operator Jack Ruby. In the end, the police did pretty well. They caught Oswald within two hours, but Dallas became the laughing stock of the whole nation.

Also in my collection is the book Reclaiming History: The Assassination of President John F. Kennedy by Vincent Bugliosi (2007). He concludes that Oswald was the lone gunman and destroys every one of the conspiracy theories.

Another book that agrees Oswald was the lone gunman also asserts that the darkest days of Dallas were caused by local ultraconservatives, such as oilman H.L. Hunt, former Army general Edwin Walker and national congressman, Bruce Alger. That book is Nut Country: Right Wing Dallas and the Birth of the Southern Strategy, by Edward H. Miller (2015).

In your previous Collectibles Conversation presentation, you referred to many Dallas bookstores in whose aisles you lost yourself. How big a role did its bookstores play in your understanding of Dallas history?
Dallas bookstores and libraries have been important throughout all my life. When I was small my dad drove my sister and me to the Lakewood Theater on Saturdays to watch a double feature movie and the cartoons. Afterwards we walked across the street to the Lakewood Library, which allowed us to call home (in the pre-cell phone era). While waiting for dad to come, we checked out lots of books.

Closer to home, I was part of the opening of the Casa View Library, which in 1964 set a national record of checking out over 9,000 books in a single day! In appreciation of the library’s influence in my life, I have put together twenty exhibits at the downtown Dallas Library on a wide variety of subjects, all from my personal book collection.

As a young teenager, I could visit Harper’s Used Books in the Deep Ellum section of downtown Dallas. My primary goal was to collect old Boy Scout Handbooks. What I found was so much more. A college student visited the same bookstore a couple of years before me. He became a Pulitzer Prize-winning author, Larry McMurtry, of Lonesome Dove fame. McMurtry wrote about the changes that occurred as Texas changed from a rural to a mostly urban economy.

My experiences in bookstores have enriched my life and broadened my perspective on how I grew up in Dallas and what I can give back to the cultural life of the city.

Want to hear more from Bob about life in Dallas in the 50s and 60s?  Join us at the HPB Flagship in Dallas for Collectible Conversations: 1950s and 60s Dallas Through Books on Thursday December 28 at 6 p.m.!

One thought on “Collectible Conversations: The History of Dallas in the 50s & 60s Through Books”