Bet you didn’t know that March 2 is Old Stuff Day! (Seems like every day is Old Stuff Day around my office—my house, too.) It made me start thinking about all the discoveries we’ve made in the buying areas of our stores across the country. Sometimes, it’s a memento left in a book. Most notably, there was an old book a store had had for a while in a backroom; tucked inside it was a lock of hair pinned to a 1934 obituary. We tracked down a descendant of the deceased and returned the precious keepsake. Sometimes, it’s a book that looks like nothing much but turns out to be extremely scarce, like the second edition of Calvin’s Commentaries, its centuries-old cover worn and plain, found in the bottom of a box of “old stuff.” (While we had it on display, someone stole it and then returned it, with a note attached that said he’d only wanted to be able to hold it for a while.) 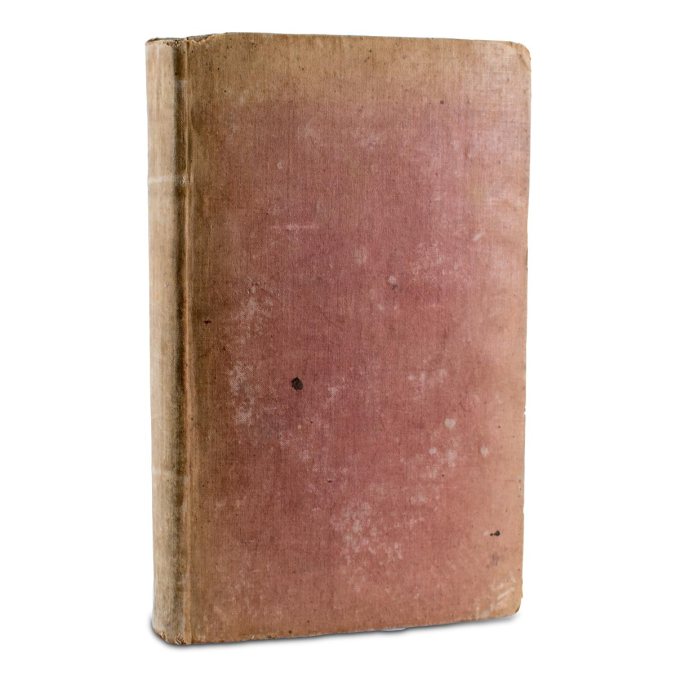 Not long ago, a store employee came across the book pictured above. We took a closer look. At first (and second and maybe third) glance, it appeared to really just be old stuff. Its cover was mottled and faded, bumped and spotted. There was no title, author, or other information featured on its cover. Its pages were foxed and browned, some to an extreme. But, hey, the book was published in 1833, almost two centuries ago. You might expect some fading and foxing. 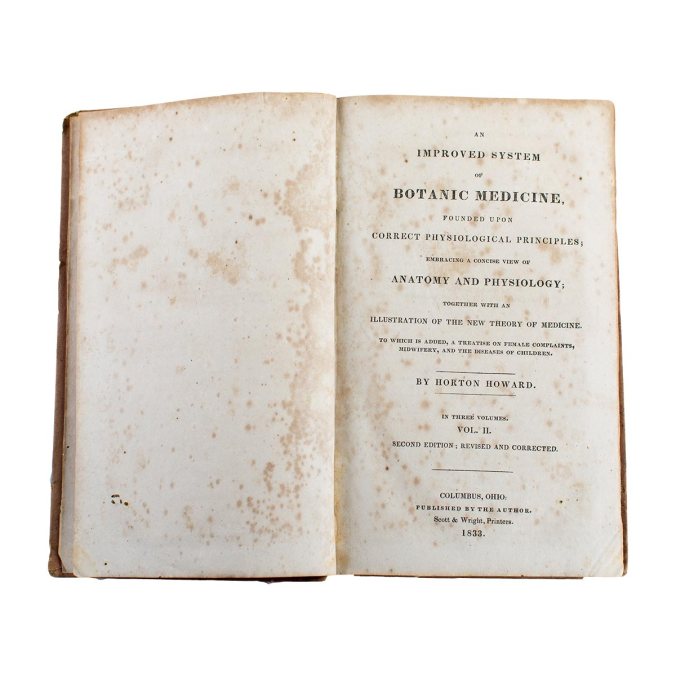 When I saw that the book was “Published by the Author,” I became more curious about it. I’d never heard of author Horton Howard, but the title was interesting: An Improved System of Botanic Medicine, Founded Upon Correct Physiological Principles; Embracing a Concise View of Anatomy and Physiology; Together with an Illustration of the New Theory of Medicine. Wow. And the subtitle was curious, too: To Which Is Added, a Treatise on Female Complaints, Midwifery, and the Diseases of Children. Not something you see every day, particularly as observed back in the time of President Andrew “Old Hickory” Jackson. That alone made me feel that the book was worth saving. 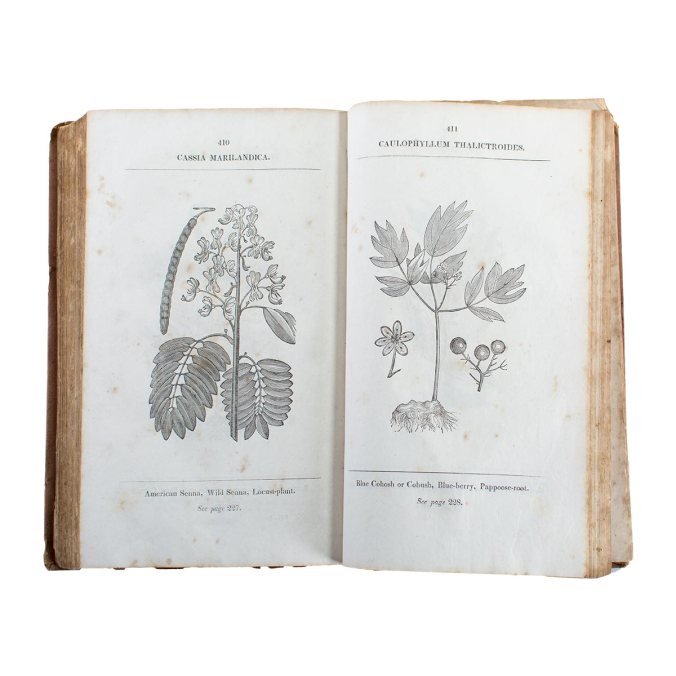 And then I flipped through the pages of the book and discovered there were thirty pages of illustrations of plants—medicinal plants—that were referred to in the text. Some of the plates were extremely foxed, but others were still unblemished. Old stuff worth saving!

Turns out, Horton Howard was a Quaker who was trained in medicine but had not done much practice as a doctor, favoring work expanding Quaker outposts westward. Then he heard about plant cures for illnesses, decided to learn more about that and made it a mission to develop and promote natural cures for all sorts of maladies. That makes Howard an alternative health pioneer and this little book an important early text in the use of herbal cures gleaned from Native Americans. Scanning the chapters, I became engrossed in the lore and language (and may try a few of his remedies out). 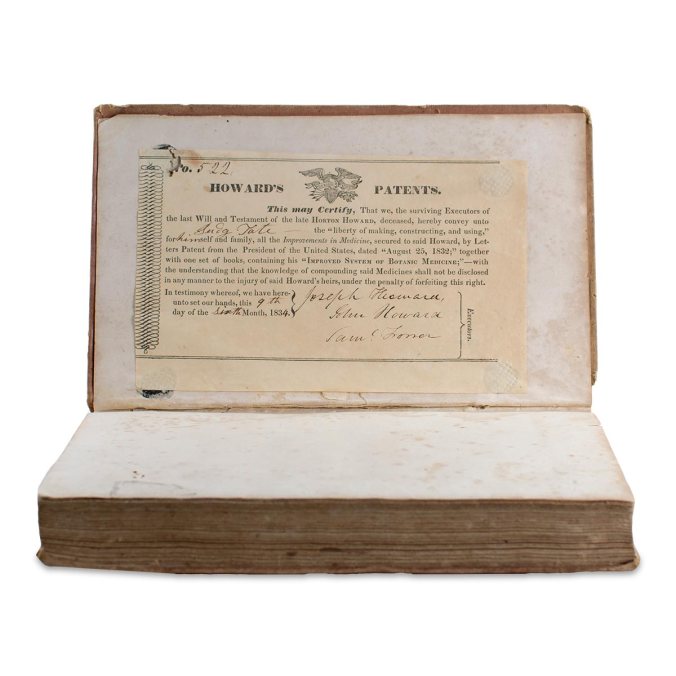 What made this scarce book unique and extra-special was the last thing I spotted: a patent notice, dated June 9, 1834, affixed to the book’s front-free endpaper. Horton Howard had died shortly after the book’s publication (of cholera, along with his wife, a daughter and two grandchildren—had they tried any of the remedies he published?). With this notice, his executors, sons Joseph and John, and Samuel Jones, granted someone named Tate the “liberty of making, constructing, and using” these discoveries patented by Howard in 1832. Tate officially agreed that his “knowledge of compounding said Medicines shall not be disclosed in any manner to the injury of said Howard’s heirs…”

This piece of “old stuff” may be more of a curiosity than a valuable collector’s item, but as curiosity pieces go, it’s one of the more alluring ones I’ve come across here at HPB—and I’ve had my hands on lots of old stuff!

One thought on “Just some old stuff… (Rarest of Rare Collectibles)”