It can’t be denied that the mid-1960s was the golden age of the animated TV Christmas special. You could deny it, but you’d be wrong. The stop-motion Rudolph the Red-Nosed Reindeer premiered in 1964, and A Charlie Brown Christmas debuted twelve months later. The next year, in 1966, How the Grinch Stole Christmas aired for the first time.

To celebrate the 50th anniversary of the animated Grinch, here are 50 facts about the classic TV special and the people who made it.

1. The Dr. Seuss book on which the special is based was published by Random House in 1957. It also appeared in an issue of Redbook magazine at the same time.

2. Dr. Seuss was the pen name of Theodor Geisel. His dozens of children’s books have spawned 11 TV specials, four feature films, four TV series and a stage musical. He won a Pulitzer Prize in 1984.

3. While attending Dartmouth College, Geisel got caught drinking gin with friends in his dorm room. As punishment, he was forced to stop all extracurricular activities, including writing for the school’s humor magazine. To surreptitiously keep writing for it, he began using the pen name Seuss. (Dartmouth gave him an honorary doctorate in 1956.)

4. His first book, And to Think That I Saw it on Mulberry Street, was rejected by anywhere from 20 to 43 publishers, depending on which time he told the story.

5. An early version of the Grinch character appeared in 1955 in a Seuss story called “The Hoobub and the Grinch.”

6. The Grinch was the first adult and the first villain to be the main character in a Dr. Seuss book.

7. Dr. Seuss said he was inspired to write the book one December 26, when he saw “a very Grinch-like countenance in the mirror…I wrote the story to see if I could rediscover something about Christmas that I obviously lost.”

8. Geisel struggled with the ending of How the Grinch Stole Christmas. He told an interviewer: “I got hung up getting the Grinch out of the mess. I got into a situation where I sounded like a second-rate preacher… Finally in desperation…I showed the Grinch and the Whos together at the table, and made a pun of the Grinch carving the ‘roast beast.’ … I had gone through thousands of religious choices, and then after three months it came out like that.”

11. The Grinch special was directed by legendary animator Chuck Jones, who worked on dozens of Looney Tunes and Merrie Melodies shorts for Warner Brothers. 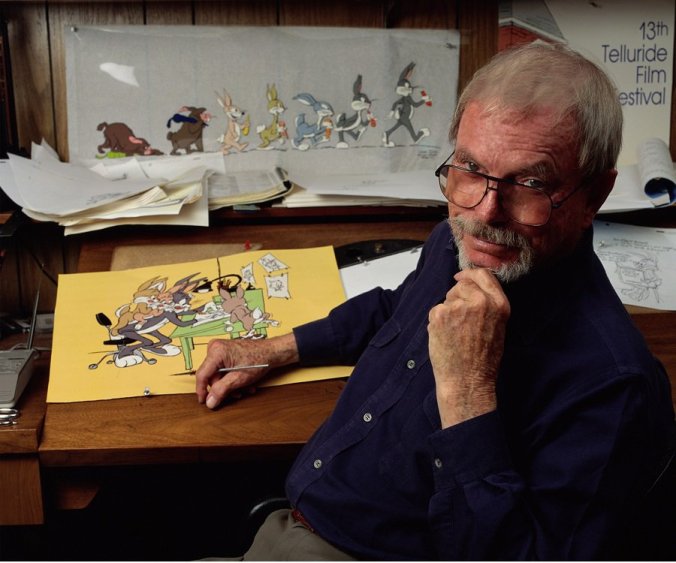 12. In addition to working on cartoons featuring Bugs Bunny and Daffy Duck, Jones was the creator of Pepe LePew, Marvin the Martian, the Road Runner and Wile E. Coyote.

14. Many have noted parallels between Geisel and the Grinch. Seuss was 53 when wrote the book, which is evidently the Grinch’s age in the story—he complains of putting up with the Who-ville Christmas celebration for 53 years.

16. Actor Boris Karloff narrated the special and provided the voice of the Grinch. The English actor, born William Henry Pratt, was mainly known for playing Frankenstein’s monster in films. 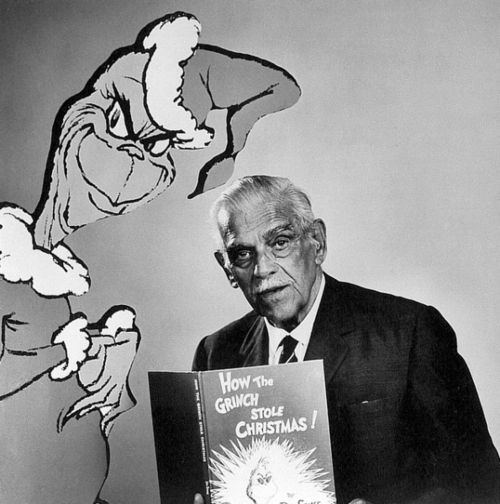 17. Chuck Jones wanted Karloff after hearing him reading narration on a 1958 recording of Rudyard Kipling’s Just So Stories.

18. Ted Geisel was skeptical of the casting of Karloff, fearing the Grinch might end up too scary.

19. Dressing as Santa is one thing Karloff and the Grinch had in common, though for opposite purposes. Starting in 1940, Karloff dressed as Father Christmas each December to hand out presents to kids at a Baltimore hospital.

20. The song “You’re a Mean One, Mr. Grinch” was sung for the special by Thurl Ravenscroft, the actor who gave voice to Tony the Tiger in Kellogg’s Frosted Flakes commercials from 1952 until 2005.

21. Ravenscroft was uncredited on the Grinch special, which lead many viewers to believe Boris Karloff had done the singing.

22. When Ted Geisel realized that Ravenscroft was not credited onscreen, he made up for the error by writing letters to several prominent newspaper columnists, urging them to write about the man who sang the Grinch song.

23. The voice of little Cindy-Lou Who was provided by June Foray, a legendary voice actress who also voiced Rocky the Flying Squirrel, Lucifer the Cat in Cinderella, Granny (the owner of Sylvester and Tweety), and, more recently, Grandmother Fa in Mulan.

24. Chuck Jones reportedly said, “June Foray is not the female Mel Blanc. Mel Blanc was the male June Foray.” Foray, born in 1917, was still working in cartoons as recently as 2014.

25. After Jones realized that a straight-through reading of the Grinch book only translated to about 12 minutes of screen time, he extended the story largely by giving a larger role to Max, the Grinch’s loyal but put-upon dog.

26. According to Jones, Max represents the audience, in that we see the Grinch through his eyes. Some of the dog’s antics were inspired by a childhood dog belonging to Jones.

27. The three songs for the special were composed by Albert Hague, with lyrics by Ted Geisel himself.

28. Hague was a successful Broadway composer who had written several notable songs, including 1954’s “Young and Foolish,” which has been recorded by many pop and jazz performers.

29. Hague says he was never asked to write music for another cartoon, despite the success of Grinch.

30. Hague was also an actor, best-known for playing Mr. Shorofsky, the music teacher in Fame, both the movie and the TV series.

31. “You’re a Mean One, Mr. Grinch” has been covered by the likes of Aimee Mann, Mojo Nixon, Cee Lo Green with Straight No Chaser, the Brian Setzer Orchestra, Dweezil Zappa and Take 6.

32. The made-up words in the hymn-like song “Welcome Christmas” were meant to sound like Latin, evoking the traditional sounds of choral music. After the show aired, the studio received letters from viewers asking for a translation.

33. A soundtrack LP for the special was released in 1966. Boris Karloff won a Grammy for his narration on the record; it was the only major performing award of his long career.

34. Another key member of the creative team was production designer Maurice Noble, who designed the backgrounds and color schemes for the show. Noble worked with Chuck Jones on and off for nearly 50 years and is known as the premier designer in animation history.

35. Lead animator Phil Roman later oversaw animation for The Simpsons and King of the Hill.

36. The Grinch was not green in the original book. In fact, since the book was illustrated with minimal use of color, he was pretty much colorless. The exact shade of green used for the character was chosen by Chuck Jones after he encountered several rental cars that bore a similar ugly hue.

37. Near the end of the show, the Grinch’s eyes change color from devilish red to blue to match his change of personality from evil to good.

38. Director Chuck Jones screened the finished special for 25 potential sponsors. All of them passed on it until the Foundation for Commercial Banks signed on. Jones thought this was ironic given the story’s anti-materialistic message.

40. The special got good reviews after it first aired and still gets good ratings after all these years. It won its time-slot as recently as 2010.

42. CBS showed the Grinch every year until 1987. It then aired on various networks before landing on NBC in 2015.

43. The line “You’re a rotter,” from “You’re a Mean One, Mr. Grinch,” was sometimes censored because it was deemed too vulgar.

44. Theodor Geisel’s step-daughter once said: “I always thought the Cat [in the Hat] was Ted on his good days, and the Grinch was Ted on his bad days.”

45. While Seuss may have seen the Grinch as one of his own alter egos, he remarked that Chuck Jones’s drawings of the character looked a lot like Jones.

46. At the official Dr. Seuss website, Seussville.com, you can find recipes for Who Roast Beast and Who Hash, among other delicacies.

47. It’s interesting that two of the most beloved TV Christmas specials—the Grinch and Charlie Brown—both make strong statements against the commercialization of Christmas while airing on TV with corporate sponsors.

48. In 1977, ABC aired Halloween is Grinch Night, a prequel of sorts to How the Grinch Stole Christmas. Also written by Dr. Seuss, it won an Emmy for Outstanding Animated Program.

49. A live-action feature film of the Grinch story, directed by Ron Howard and starring Jim Carrey, was a big hit in 2000.

50. Benedict Cumberbatch will voice the Grinch in a new computer-animated Grinch movie, set to be released for the 2018 holiday season.