Pocket paperbacks have always been a large segment of HPB’s product mix, but we’re seeing fewer of them now, as much genre fiction has migrated into electronic delivery modes. But we still devote considerable store space to them, and we still find a place for collectible PBs from the mid-twentieth century.

Paperbacks were first popularized in England by Penguin Books, which issued its first ten titles simultaneously in 1935. Mass-market PBs were introduced in America on a large scale by Pocket Books in 1939. Many other publishers followed, and this affordable, handy form of reading material has been bought for convenience and thrift ever since.

There’s a reason pocket-sized paperbacks are called “mass-market”—they were created as an alternative to the hardcover editions the “masses” couldn’t always afford. They were generally cheaply made and weren’t really meant to last a long time. But some have indeed lasted and are still eagerly sought, primarily for their cover art that so thrillingly reflects the pop culture of its time.

We’d like to present some fine examples being offered by three of our stores, the South Lamar location in Austin, Texas, the Countryside, Illinois location, and the Dallas Flagship location in Texas.

Death on Scurvy Street by Ben Ames Williams
Popular Library #194, 1949
Mysteries in the lurid-cover, murder-and-sex pulp fiction PB form are mainstays of fans’ collections. This minor 1929 mystery by prolific author Ben Ames Williams was resurrected and hyperbolized in this late-forties paperback edition. If this cover by Rudolph Belarski doesn’t lure you in, maybe the cover blurb will: “She waited for love and got murder.”

Spiderweb by Robert Bloch, and The Corpse in My Bed by David Alexander
Ace #D-59, 1954
Each paperback in the Ace Doubles series joined two tales in one. This one features the first appearance of Bloch’s Spiderweb in any form—and is signed by him!

Earthman, Go Home! by Poul Anderson and To the Tombaugh Station by Wilson Tucker
Ace #D-479, 1960
Science fiction aficionados can also choose from plenty of paperbacks with colorful and fanciful covers, some written by the best in the field. This Ace Double features the great Poul Anderson, paired with Wilson Tucker. 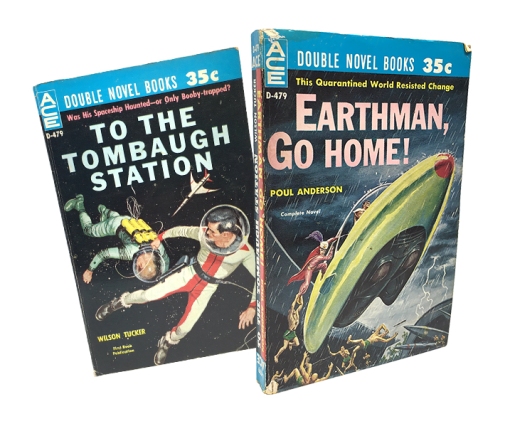 Very Good (some bumping and browning), $10

Tristessa by Jack Kerouac
Avon, 1960
Literary and popular fiction appeared in paperback editions, of course, and quite often got the pulp fiction treatment. This Avon paperback is the first appearance in print of this minor Kerouac novel about a “morphine-racked prostitute.” Unlike On the Road, Tristessa doesn’t appear on school reading lists.

The Walt Disney Story of Our Friend the Atom by Heinz Haber
Dell First Edition, 1959

Fiction, especially genre fiction, dominates the mass-market collectibles market, but there are some great nonfiction titles out there in paperback, too, including this one—everything you wanted to know about the atom, entertainingly presented by Disney Science Guy Heinz Haber.

O.J. Simpson: Football’s Record Rusher by Larry Felser
Scholasticon: Footballs Record rusher , 1974. Signed and inscribed twice by O.J. Simpson, and signed by Elizabeth Montgomery
South Lamar Store Manager Julie tells us that “this book belonged to someone who as a little kid got O.J. to sign it on two separate occasions.” Elizabeth Montgomery, who played Samantha on Bewitched and later co-starred with O.J. in the made-for-TV movie A Killing Affair, also signed the book (although she doesn’t appear in its pages).

If you want to take a trip back through pop culture of bygone times, all you have to do is browse the collectible paperback rack at your nearest HPB location. And if you’re interested in purchasing any of the PBs featured above, just let me know! Click here to contact me.

One thought on “Pocket Paperbacks: You Can Judge a Book by Its Cover (Rarest of Rare Collectibles)”