I know what you’re going to say: “Wait a minute!  I thought Bugs Bunny’s birthday was in July!” To which I will respond, “It is…well, sort of.”

Yes, Bugs Bunny’s first starring role was in the short “A Wild Hare,” which debuted on July 27, 1940.  However, Bugs was first in a Porky Pig cartoon called “Porky’s Hare Hunt,” and this cartoon premiered on April 30, 1938.  So what happened between April 1938 and July 1940?  Where did our rascally rabbit go?  How did he get his big break? And what launched him into superstardom?

Here are ten facts about Bugs Bunny that shed light on these questions and so much more.

1. On April 17, 1937, Warner Bros. released a cartoon entitled “Porky’s Duck Hunt,” which introduced the world to Daffy Duck. The cartoon was a success, so the next year when the studio was pushing for another cartoon, director Bob Clampett decided to recycle some of the jokes that hadn’t made it into “Porky’s Duck Hunt” with the suggestion that they “dress the duck in a rabbit suit,” “Porky’s Hare Hunt” was born, and so was Bugs Bunny.

2. The first iteration of Bugs Bunny was a lot different from the Bugs we know. For one thing, he was originally all white, and they alternated between giving him buckteeth to no teeth at all.

3. Originally named “Happy Rabbit,” Bugs got his final name from his animator Ben “Bugs” Hardaway. A co-worker casually referred to his drawing as “Bugs’ Bunny.”

4. To cash in on the popularity of Daffy Duck, the decision was made that the rabbit’s voice should mimic Daffy’s. The man of a thousand voices, Mel Blanc, was called in to provide the voice.  However, Mel had his own thoughts of how Bugs should speak, especially after they told him the bunny was “a tough little stinker.” Thinking that the toughest guys come from either Brooklyn or the Bronx, Mel merged the two accents, and that’s how Bugs got his voice.  In fact, Bugs was so tough that he ended up saving Mel’s life. When a serious automobile accident had left Mel in a coma for weeks, the doctor, trying to get some sort of response from him, asked him, “Bugs Bunny, how are you doing today?” to which Mel responded, “What’s up, Doc?”

5. Bugs Bunny’s mannerisms were inspired by different actors, such as Groucho Marx and Charlie Chaplin, but it was Clark Gable, snacking on carrots while leaning against a tree and talking with his mouth full in It Happened One Night, that encapsulated the attitude the director and animators wanted for Bugs.

6. Bugs’ catchphrase “Eh, what’s up, Doc?” was the first ever catchphrase for any cartoon character.

7. In 1943, Bugs starred in a cartoon short called “Super-Rabbit,” where Bugs wore a U.S. Marine Corps blue uniform. Afterwards, Bugs was made an honorary private in the Corps. and was promoted in rank throughout World War II, finally retiring as a Master Sergeant. He also shows up in several “Private Snafu” military shorts, which instructed troops on topics like sanitation and confidentiality. The shorts were considered classified, and not even the team that worked on them got to see the final product.

8. Bugs Bunny was the second cartoon character to get a star on Hollywood’s Walk of Fame. The first was Mickey Mouse, but that’s pretty good company.

9. Bugs Bunny was the first cartoon character to be put on a stamp. Take that, Mickey! 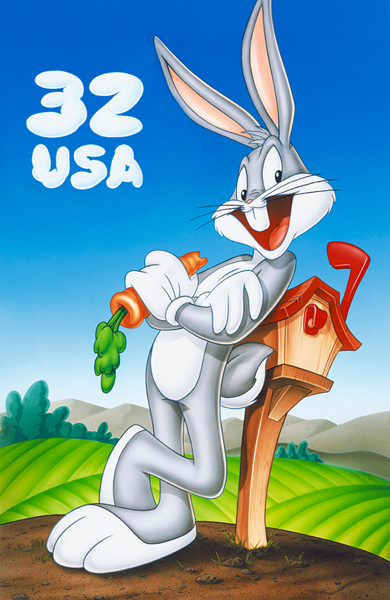 10. Speaking of Mickey Mouse, it seems that scientists have conducted psychological studies about false memories where they show people advertisements for Walt Disney World featuring Bugs Bunny—and people say they remember meeting him there. False memories, or is Bugs organizing a coup?

So, whether you celebrate Bugs Bunny’s birthday in April or July, you have to admit, this bunny is worth celebrating, even if he does get a little lost sometimes.  He just keeps missing that left at Albuquerque.

Julie is Traffic Manager at Half Price Books Corporate.
You may follow her on Twitter at @auntjewey.