Summer will be here before we know it and that means summer blockbusters coming to the big screens. Maybe you aren’t interested in turtles that know karate or the latest alien invasion, so how about some great summer reading to get the jump on some other movies hitting theaters soon. 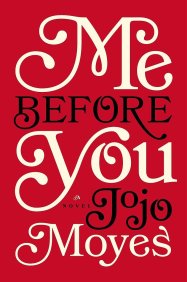 Me Before You by Jojo Moyes

Louisa Clark knows a lot of things, but what she doesn’t know is that she is about to meet and fall in love with the most unexpected of men, Will Traynor, a man suffering from a motorcycle accident who falls for Louisa and now has a reason to live. Me Before You stars Emilia Clarke and Sam Claflin. Look for Me Before You in theaters June 3.

Max Perkins by A. Scott Berg

The movie will be titled Genius. This is the story of Max Perkins, who was a book editor at Scribner and oversaw the works of Thomas Wolfe, Ernest Hemingway and F. Scott Fitzgerald. A very promising film staring Nicole Kidman, Guy Pearce, Colin Firth and Jude Law. Look for Genius on June 10.

The BFG by Roald Dahl

Sophie encounters the Big Friendly Giant (BFG) who, despite an intimidating appearance, turns out to be a kindhearted soul who is considered an outcast by other giants because he refuses to eat boys and girls. The film should be highly entertaining with Steven Spielberg behind the camera. The BFG hits the big screen July 1.

Mike (Adam DeVine) and Dave (Zac Efron), a pair of hard-partying brothers, place an online ad to find dates for their sister’s Hawaiian wedding. Hoping for a wild and crazy getaway, Mike and Dave instead find themselves outsmarted and out-partied by their new found dates. Mike and Dave Need Wedding Dates will be released on July 8.

The Light Between Oceans by M. L. Stedman

A lighthouse keeper and his wife, played by Michael Fassbender and Alicia Vikander, rescue a baby from a boat that they found adrift. They take the child in and raise the baby as their own. Also staring Rachel Weisz. Directed by Derek Cianfrance who also directed Blue Valentine. This film starts Labor Day weekend on September 2.

Jim is Art Director at Half Price Books Corporate.

One thought on “Books: Read the Movie, Your Summer Guide to Movies Based on Books”