King Kong, the blockbuster girl-meets-gorilla movie, premiered in March 1933. All these decades later, the big, lovelorn ape still intrigues us and continues to inspire works in various media.

A hardback copy of the novelization of the movie, a nice little curiosity piece, came into our Tacoma, Washington, store recently. The book was assembled by multiple hands in advance of the movie’s release, so it’s actually a novelization of a movie that hadn’t yet been released! The book/movie concept evidently sprang from a dream film director Merian C. Cooper had. 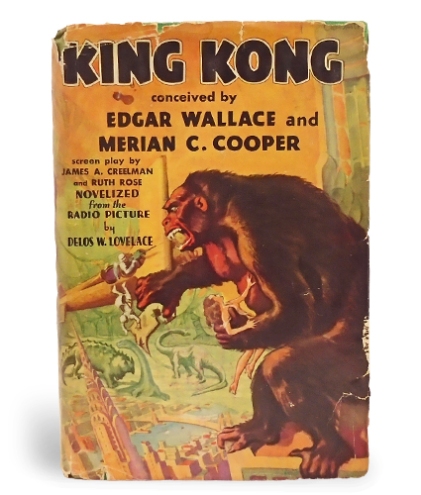 King Kong: Conceived by Edgar Wallace and Merian C. Cooper / Based on the screen play by James Creelman and Ruth Rose / Novelized from the Radio Picture by Delos W. Lovelace

Bound in bright green cloth with brown title on cover and spine. Endpapers are covered in sepia-toned movie stills. Scarce in dust jacket. $3,000.

Binding is tight and square. Some bumping and rubbing on the edges and near the spine of the boards. There is some sun damage/fading near the top edge of the front cover and on the spine. Pages are slightly yellowed. Dust jacket has some bumping, rubbing and scuffing, as well as some chipping and closed tears, with a small piece missing at the top of the spine and along the bottom edge of the back corner. Also slight sun damage along the spine. There is a small brown stain just below the word “King” on the front cover.

And this colorful coffee-table book is at our Flagship store in Dallas:

The World of Kong: A Natural History of Skull Island by Weta Workshop
Pocket Books, 2005. First Edition. Near Fine. $50.

Peter Jackson, who directed the blockbuster Lord of the Rings movies, followed them up in 2005 with his long-planned remake of King Kong. He used the visual effects company he’d used on the Tolkien movies, Weta Workshop, and their creative work is displayed to great effect in this book. Jackson’s remake was the biggest-budget movie project to that date, but it did make the money back, and then some. It starred Naomi Watts in the Fay Wray role (Ann), with Adrien Brody as love-interest screenwriter Jack, and Jack Black as film director Carl Denham.

*Maximum discount $150 with any coupons or discount offer applied.