This is an exciting time to talk about books being made into movies! It is the fall season, which also means…Oscar season. Every book mentioned here has a chance to bring home some gold next February and change the Oscar race in some way. Here we go.

The Martian by Andy Weir
Ridley Scott, who brought you the sci-fi blockbusters Alien and Blade Runner, directs what is sure to be another classic in The Martian. Matt Damon stars as astronaut Mark Watney, who is presumed dead and left behind, stranded on Mars. Watney ingeniously finds a way to survive on the hostile planet. The Martian hits the big screen on October 2. The Martian is also our HPB Book Club selection this month! Join the discussion here! 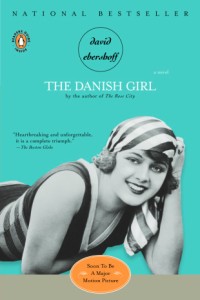 The Danish Girl by David Ebershoff
Based on the remarkable love story of artists Lili Elbe and Gerda Wegener, including their marriage and groundbreaking journey as Elbe becomes one of the first-known recipients of transgender surgery. Eddie Redmayne portrays Lili Elbe in what will surely be an Oscar-nominated role and a chance for back-to-back Best Actor Oscars. The Danish Girl is directed by Tom Hooper (The King’s Speech) and starts November 27.

In The Heart of the Sea by Nathaniel Philbrick
Ron Howard (Apollo 13, A Beautiful Mind) always seems to be a player during Oscar season, and we expect nothing less from him this year, as he tells the tale about the Essex, which was sunk by a whale in 1820, leaving all aboard stranded at sea for more than 90 days. Starring Chris Hemsworth, Charlotte Riley and Ben Whishaw (Skyfall) as Herman Melville. Opens December 11.

The Revenant by Michael Punke
Frontier trapper Hugh Glass is mauled by a grizzly bear and then left for dead by thieves. He then embarks on a path of revenge. Glass is played by Leonardo DiCaprio, and early buzz has him in the already-crowded Best Actor category for an Oscar. Look for this film to be a player for more awards as well, being directed by last years winner for Birdman, Alejandro González Iñárritu. The Revenant has a release date of Christmas Day.

It is going to be a very exciting Oscar movie season. Go ahead and get the jump on things by reading some of the great movies hitting theaters this fall!

Jim is Art Director at Half Price Books Corporate.