When you buy everything printed and recorded all day, every day, for 40 years, at an ever-growing number of locations, you see a lotta weird and wonderful stuff!  Here’s a first installment of 40 memorable buys we’ve made over the years.

A few years ago, our Plano store was fortunate enough to purchase several books that were fore-edge painted.  What, you may ask, does that mean?

Fore-edge painting is an almost-lost art.  An artist paints a scene of some sort on the fore-edges of the pages of a book—the edges opposite the book’s spine—while those pages are fanned.  When the book is closed and lying flat, the painting is not visible. When you fan the pages: Voila! The hidden scene appears! Often, the bookbinder would add gilt or marbling to the page edges in order to further conceal the secret scene.  Our buyers wouldn’t have even known that the books they were buying were fore-edge-painted if the seller hadn’t made a note of it.

Here’s one of the books Plano bought, Poetical Works of Robert Bridges, from 1913, unfanned (on the left). Note that the book itself is not especially interesting or desirable to a collector; that is, without its little secret. Here’s a photo revealing the scene, an “Eton School Room” (on the right). 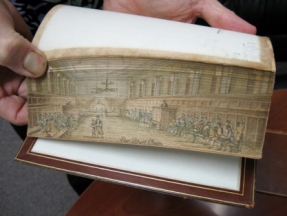 Fore-edge painting is very uncommon, so I wouldn’t suggest rushing to your shelves and fanning all your old leather-bound treasures.  But fore-edge-painted books could make an interesting collection (which you’d have to be prepared to show-and-tell).

Way back in 1990, longtime employee Chuck Pierce was assigned to work the Religion section at one of our Houston stores.  One day, he spotted an old worn Bible that was in pretty bad condition. Just before he set it aside to be recycled, he opened it and, to his surprise, saw his father’s name along with the names of his siblings. Turns out that Chuck had serendipitously come across the Bible of his aunt who had passed away twenty-six years before. Chuck believes that he was meant to have that Bible and keeps it close-by to this day. 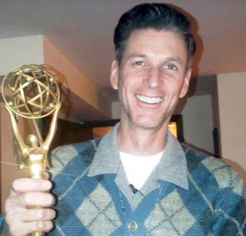 Wisconsin District Manager Joe Desch and District trainer Carolyn Beck went out on a buy recently and didn’t see much among the books and CDs that was very exceptional.  “However,” says Joe, “this guy was amazing!  He was a writer for the Carol Burnett show and won an Emmy for his work on the fifth season.  He also produced the 25th anniversary TV special for the founding of the state of Israel and worked with Jim Henson.”  Joe is pictured here delivering his fantasy Emmy acceptance speech.

4. Leafing through a classic.

We occasionally find flowers pressed into books sold to us, but once, when I was checking the condition of a Disney Giant Golden Book from the seventies, I noticed that a large, perfectly-preserved marijuana leaf was pressed between a couple of pages.  On further inspection, I discovered a total of twenty, one inserted every few pages throughout the book.

A collection in a file folder, bought at our Kenwood store in Cincinnati, Ohio, contained the findings of Dr. Francis Forster, a noted neurologist who was called to testify at the 1964 trial of Jack Ruby for the murder of Kennedy assassin Lee Harvey Oswald.  Forster’s testimony countered Ruby’s insanity defense.

Documents included in the file: dictaphone recording and transcription of a meeting between Dr. Forster, assistant prosecutor William F. Alexander, and Dr. William Peterson; Forster’s interpretations of two encephalograms made of Ruby; copies of other physicians’ findings; and correspondence from Forster to Alexander.

This unique grouping of documents gained the attention of the Sixth Floor Museum in Dallas, and was donated by HPB to that organization. The Sixth Floor is a John F. Kennedy museum located in the old Texas School Book Depository building where Lee Harvey Oswald perched.

Certainly not all of our buys are quite this memorable, but there are enough to keep the buying gig pretty interesting!  Look for another five tales from the Buy Guy archives next month.