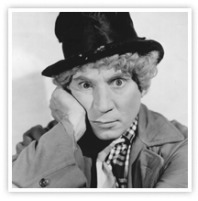 Wow. Where do I even begin to talk about one of the great comedians of all time? Harpo Marx (born November 23, 1888 – died September 28, 1964) and his comic style was influenced by clown and pantomime traditions.

I was first introduced to the Marx Brothers at a very young age, and I can truly say that films such as Duck Soup, Horse Feathers, A Night at the Opera and Animal Crackers still stand the test of time. Their films are funnier than ever, with each member of the comedy team having a distinct role, including Harpo’s as the silent zany one who communicated only with a horn or by whistling! Some of the most memorable comedy scenes in movie history belong to the Marx Brothers.

My absolute favorite is the “mirror” scene from Duck Soup (1933) which shows Harpo at his best. You may also remember a similar scene re-done in an episode of “I Love Lucy” which originally aired on TV in 1955 with a hilarious Harpo and Lucille Ball duo (clip below).

I encourage everyone to sit down and watch a few of these great classic comedies!

Thank you for all the laughs. Here’s to Harpo!﻿

Remember: no talking or texting during the feature presentation.