With a lot of the country coming out of a heat wave (seemingly overnight) and a full weekend of college and pro-football in the books, it is pretty easy to pick a topic to talk about this week… FOOTBALL! Giving it a quick thought, you might not think there are many football movies out there, but I have dug up my favorite gems for you to consider watching to build up your team spirit for the start of the season.

1. My top pick for football movies is the Marx Brothers classic Horse Feathers (1932). No one said football had to be taken seriously. Professor Wagstaff, played by Groucho Marx, is the new Dean of the college, and he thinks winning the Thanksgiving Day game against its rival Darwin is a top priority. Wanting to do this illegally, he tries to hire two ringers that hangout in the local speakeasy. Of course he hires the wrong men, Baravelli and Pinky, played by Chico and Harpo Marx, and the shenanigans begin. This is a true classic laugh-out-loud movie. I hope future generations go back and watch Marx Brothers’ films like this one to keep their antics alive.

2. Heaven Can Wait (1978). Nominated for 9 Academy Awards, including Best Picture, this remake of Here Comes Mr. Jordan (1941) is a well-rounded film. Warren Beaty, both the star and co-director, plays a professional football player whose life was taken too soon, and by mistake. In order to fix the problem, the angel Mr. Jordan has to find Joe Pendleton another body. Once a body is found, he proceeds to make it his goal to make it as quarterback of the Los Angeles Rams. Of course there are many other plot lines with a touch of romance and comedy. I don’t want to give anything away… No spoilers here. You just need to see it for yourself.

3. “Show me the money!” Jerry Maguire (1996) is a strong number three. This film won Cuba Gooding Jr. a well-deserved Best Supporting Actor Oscar for his role as Rod Tidwell, the disgruntled wide receiver who is trying to sign a new contract. Jerry Maguire was also nominated for Best Picture and received a Best Actor nomination for Tom Cruise, who played Tidwell’s agent. In my opinion, this is one of Tom Cruise’s best performances. Okay, maybe there is a lot of romance in this one for a football fan to wade through, but it is a winner of a movie with lots of great, quotable one-liners.

4. Okay, now one for the die hard football fans: The Longest Yard (1974) – but not the junk put out in 2005. The original is a guy movie all the way, staring Burt Reynolds as recently imprisoned ex-pro football player Paul Crew, who wants to put together a football game – the cons against the guards. Eddie Albert makes a great warden and James Hampton puts in a nice performance as Caretaker. Plenty of laughs and smash mouth football in this one. Grab your favorite bottle of suds and throw this on when it’s “guys movie night” at your house.

5. And last, but by no means least – really uncovering a hidden gem here for you – Kurt Russell and Robin Williams star in The Best Of Times (1986). Williams plays Jack Dundee, a man haunted by his high school past mistake of fumbling the winning catch in the big game. Of course the player who threw the pass was Reno Hightower (Russell), whose football career never went anywhere because of the blunder. So what better way to make things better than to replay the game again 14 years later? But the town has fallen on hard times, so convincing them to rehost the rematch is a tough sell. This might be a sleeper you’ve  never seen, but worth checking out for sure. 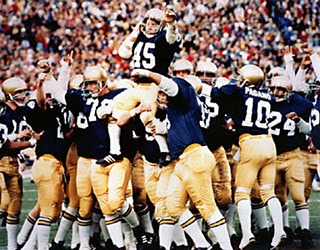 There are a lot of other great football films that I didn’t even mention, like The Blind Side (2009) which won Sandra Bullock her first Oscar. And if you want to see Samwise Gamgee play football for Notre Dame, check out Rudy (1994). Thank goodness fall is almost here, and even better, the NFL is back.

What are some of your favorite football movies? Let’s compare play-books. And remember no talking or texting during the feature presentation.﻿ — Jim

4 thoughts on “Football Season is Back: Top 5 Football Film Classics”